INTRO:  this is Part One of Garlic Growing by Mark Gallagher March 31, 2015 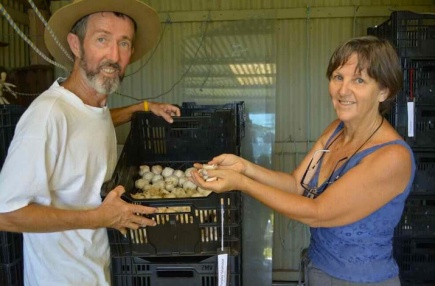 HOW IT’S DONE: stephen_kerrianne_mcnamara1 with some of their seed garlic from last year’s crop. Pictures by MARK GALLAGHER

Kempsey garlic growers Stephen and Kerrianne McNamara have created a niche market for their produce from Garlic Farmacy at Kempsey.
However local organic garlic has held onto its niche in the market, and garlic’s distinctive growing characteristics and health-giving properties make it an attractive crop for many landowners.
Two such enthusiastic new organic growers are Stephen and Kerrianne McNamara, who are currently planting their second crop on their 12ha property at Mungay Creek, inland from Kempsey.
The name of the McNamaras’ farm – Garlic Farmacy – gives a few clues to the fledgling growers’ motivations.
With a background in complementary health – they used to run a healing centre on the Central Coast – Stephen and Kerrianne are keen to promote the health-giving properties of good food, and garlic in particular.
They are strong believers in Hippocrates’ dictum, from ancient Greece, to “Let food be your medicine and medicine be your food.”
And while they practise organic growing and are in the process of seeking organic certification, they believe it is preferable to put the emphasis on “real food, from a real source, grown without chemicals”, and want to encourage people to eat “food in its most natural state”.
Both “passionate about growing things”, the couple bought their property 12 months ago with the intention of growing garlic and down the track plan to use it to promote healthier diets and lifestyles through avenues such as social media.
While healthy now, Kerrianne sold her healing centre after she contracted breast cancer, and she and Stephen spent several years travelling around Australia to recuperate and reassess their lives. While doing this Stephen had “a vision” of them becoming garlic growers. And, three and a half years later, here they are.
They planted 10 varieties of garlic last year to trial them on their soil and micro-climate and will re-plant most of the range again this year.

Varieties trialled included Shogun, Sprint, Chaz, Printanor, Italian White, Italian Pink, Glamour, Tasmanian Purple and Elephant.
They bought many of the more exotic varieties at the Gloucester Garlic Festival and others from a grower closer to their location.
Between 1000 and 2000 square metres will be planted this year, in rows that are shifted sideways each year for crop rotation.
The McNamaras were expecting WOOFERS (Willing Workers On Organic Farms) to arrive the day after Town & Country’s visit, and planned to start planting with their help on the day of the autumn equinox.
They are also still trialling composting systems, using manure from their sheep and chickens, bought-in organic mushroom compost, and the Bokashi system, which provides liquid fertiliser.
Stephen is working compost into the areas to be planted to increase nutrients and organic matter levels in the soil. He has also been experimenting with green manures and has had the best results with cowpeas and Daikon radishes, which “drill down” a long way into the soil, breaking it up for the main crop.
Daikon’s other big advantage is that the local wildlife don’t eat it – oat and vetch green manure crops just became food for the birds and kangaroos, he says.

The garlic rows will then be mulched after planting.
After his initial vision of growing garlic Stephen did some research and the more he found out, the more he liked it.
He is particularly attracted to the concentrated nature of the garlic growing process, with most of the work centred on the planting and harvest periods, with the lengthy winter growing stage requiring little grower input.
The Garlic Farmacy business plan sees the growers being able to have an overseas holiday on the proceeds of the operation in four or five years, Stephen says.
In the meantime they will be hard at work honing their garlic growing skills and spreading their healthy eating and living messages. Stephen was due to hold a vegan diet workshop in Kempsey and Kerrianne is also involved in bush flower essences and promoting her food philosophy via social media.
Town & Country plans to keep in touch with the McNamaras during the year and revisit the farm at harvest time to see how this year’s crop turns out.

what do you think? Cancel reply